Mirza Ahmad Sohrab was Secretary to Abdul Baha [from 1912 to 1919] and also served as his translator. After the passing of Abdul Baha in 1921, Ahmad took upon himself to spread the teachings of the faith and he did so quite extensively. He visited the United States as part of his mission to spread the word of Abdul Baha and propagate the Faith. It was here in the United states that Ahmad met a faithful Baha’i lady – Mrs Julie Chanler.

Mrs. Chanler also shared the Zeal of Ahmad in preaching the faith and making the people aware of the words of Bahaullah and Abdul Baha. Thereafter Mrs Chanler along with Ahmad Sohrab began teaching the faith by holding prayer meetings, classes etc. From these activities they received a strong response and were blessed with many new followers of the faith. Their success in the United States was so formidable that a large part of the Faithful in the United States could relate to their work.

Together they formed the New History Society for the purpose of spreading the Divine Words. Under the flag of this society they planned to selflessly and sincerely spread the Faith without restrictions and discrimination. This effort was the continuation of their already strong work in the domain of spreading the Faith.

However, as is seen with all selfless acts, the success of Ahmad Sohrab and Mrs Chandler in spreading the Faith roused jealousy amongst a few hypocrite Baha’is, who had comfortably occupied positions in the Administration but had never sacrificed for the spreading of the Faith and felt threatened by the success of The New History Society. Chief amongst them was, the Secretary of the NSA of the United States and Canada, Mr. Horrace Holley who in connivance with the “guardian” Shoghi Effendi sent a letter to Ahmad Sohrab demanding that he conduct all activities of the New History Society subservient to the Baha’i administration, particularly the NSA of the United States and Canada.

The intent behind this letter was to clamp down the activities of Ahmad Sohrab and the New History Society and limit their efforts of spreading the Faith. The administration feared that the increasing popularity and success of New History Society would eclipse their supposed authority and influence over the Faithful Baha’is.

However, Ahmad Sohrab maintained his resolve and refused to be subservient to the arms of the administration and denied any reporting of his efforts of preaching the faith to any administrative body. As expected, the “administration” used their cheapest tool and very conveniently excommunicated the secretary of Abdul Baha, Mirza Ahmad Sohrab, simply for preaching the words of Bahaullah and Abdul Baha and resisting all efforts to control his zeal of spreading the faith by the administration governed by Shoghi Effendi.

Despite facing “excommunication” from the faith, Ahmad Sohrab never lost hope and continued his efforts spreading the teachings of His Master to the World. As a re-doubled effort towards preaching the faith, Julie and Ahmad started a bookshop in New York on November 7th, 1939 and named it ‘Baha’i Bookshop’, as expected, since they were selling books containing literature related to the Baha’i faith containing the words of Bahaullah and Abdul Baha. They had signed a lease for the shop for a period of six months.

In response to the notice, Mrs. Chanler placed the matter in the hands of Mr. Fred J. Bechert, of the firm Mitchell & Bechert. He responded to the letter dated December 21st, 1939, simply mentioning that the word “Baha’i” could be used by anyone following the words and teachings of Bahaullah, and that it was not mandatory for a person to be under the administration in order to use it. He also stated the example of the word Christian which was used by followers of Christ till date irrespective of their subsequent beliefs or creeds. He also mentioned that the sole purpose of the bookshop and the New History Society was to spread the Baha’i cause and had no commercial intention.

In response to the above, they received a reply dated December 22nd, 1939 objecting further that use of the name “Baha’i Bookshop” constitutes trademark infringement and unfair competition. It further alleged that the use of trade name Baha’i bookshop was a misrepresentation and deceptive because it gave the erroneous impression that the book shop is operated or sponsored by the administration, the “official” Bahai religious organization, and that the use of the name Bahai Bookshop without their consent also infringes on their property rights over the name Baha’i.

Mr. Fred replied stating that Mrs. Chanler denies that the use of the trade name “Bahai Bookshop” is either a misrepresentation or a deceptive use. As stated, the Bahai Bookshop represents that it specializes in Baha’i literature and, as a matter of fact, Mrs. Chanler is herself a Bahai. He further mentioned that the Baha’i bookshop did not give any erroneous impression, that the shop is operated or sponsored by the administration, since it has no exclusive right to the name “Bahai” to describe a follower of the Bahai teachings or to identify those teachings in book form or otherwise.

Based on the above stated exchanges, Ahmad Sohrab drew and stated the understated points of inference:

In February 1940, the NSA (Baha’i Administration) decided to take legal action against the Baha’i Faithful i.e. the New History Society. However, the decision handed down in the Supreme Court of New York by Justice Louis A. Valente on April 1, 1941, crushed their false vanity and was an epoch-making document for, although it refers specifically to the Bahai Administration and The New History Society, its contents have universal application. Eloquently the court denied to the National Spiritual Assembly of the Bahais of the United States and Canada and the Spiritual Assembly of the Bahais of the City of New York a monopoly on the word “Baha’i”. It stated that any sincere seeker of truth, who has realized its highest aspirations in the Bahai Cause, can term himself a follower of Bahaullah and use his name without let or hindrance. No one can molest him or try to undermine his service in the movement. 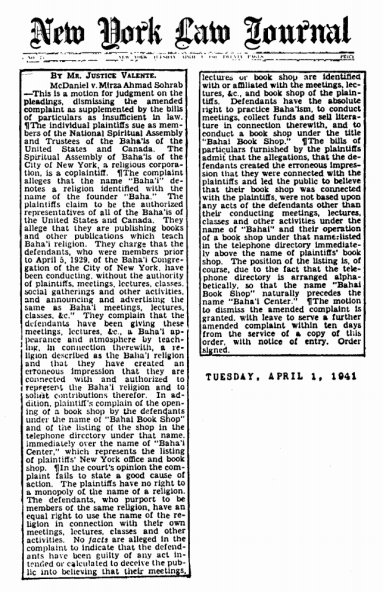 Through the decision of Judge Valente, the Bahai Cause was re-conferred upon mankind. The incident took its place in the annals of Baha’i history, that Mrs. Chanler and Ahmad Sohrab did not seek this lawsuit nor was it instituted by them. The differences of opinion between the National Spiritual Assembly of the Bahais of the United States and Canada together with the Spiritual Assembly of the Bahais of the City of New York and them, were brought before the public and inserted in legal records through no desire on their part.

A minister of a New York church struck a universal note in a letter to the New History Society thus: “I feel that this is a victory for us all, since it involves a decision rendered by Justice Valente”.

The Supreme Court judgement gave the New History Society and their likes the following five freedoms, which are valid till the existence of mankind:

Ahmad Sohrab added a note after taking note of the judgement:

The name Bahai Book Shop was then listed in the telephone directory of the Borough of Manhattan, New York City directly over the name of the Administration controlled Bahai Centre due to the alphabetical sequence, which might have further aggravated the disappointment of the administration, as it gave the book store resemblance and association to them.

Even today, after more than 75+ years, the circumstances have not changed much. Although the Baha’i administration might today not try to trademark the word “Baha’i” after such humiliation in the past, but it certainly does try to deem Baha’is not under administration, as misguided ones, trouble-makers, Covenant-breakers, enemies of the faith etc.

But in this game of name calling, it would bode well for them if they name themselves as “Haifan Baha’is” since they have their “Supreme” administrative body in Haifa-Israel and are subservient to orders from there without any individual application of Baha’i spiritual laws and let the True believers in the Laws and divine teachings be called as Baha’is.

– Alex C (guest article by one of the faithful from America)