After the deaths of the Bab and Baha’u’llah, bitter quarrels regarding the succession arose among the believers. Fortunately on the death of ‘Abdu’l Baha no one disputed the succession. This, however, did not indicate that all the followers of Baha’u’llah welcomed the accession of the Guardian, and were ready to obey him. In the early years of the ministry of ‘Abdu’l Baha, most of the members of the family of Baha’u’llah vigorously protested against what they considered unlawful assumption of authority on the family members.

It is reported on good authority that the so-called guardian Shoghi Effendi kept all the income for his plans and purposes, and failed to share it with other members of the family of ‘Abdu’l Baha, who kept quiet lest they “make a breach in the Cause of God.” (5)

3-Shoghi Effendi excommunicates every member of his family

It seems that Shoghi Effendi, pleading inability to enter upon the duties of his office forthwith, retired into solitude for several years after his return to Haifa, leaving the management of Baha’i affairs in the hands of the older members of the family of Abdu’l Baha. Bahiyya Khanum, the “Supreme Leaf,” the daughter of Baha’u’llah” who had remained loyal to her brother, became the “titular head” of the movement, while Munira Khanum, the grandmother of Shoghi Effendi, who had induced her husband to make him the Guardian and successor, was the power behind the throne. (6)

After a time, however, Shoghi Effendi began to realize the extent of the authority vested in him by the Will of Abdul-Baha, (7) came forth from his seclusion, and proceeded to exercise his power as guardian of the cause. Acting in accordance with the provisions of the Will, he “took over the reins of the Baha’i Administration, and demanded ready and implicit obedience from the servants of God, in default of which any servant of God was liable to excommunication or summary expulsion from the faith under some pretence or pretext…. His decisions were absolute and final, and his words authoritative.”(8)

It is not surprising that this policy brought the guardian into conflict not only with numerous believers but also with the members of his own family, and resulted in their excommunication. The first person to be purged by Shoghi Effendi was his grandmother Munira Khanum, wife of Abdul-Baha, the first lady of the Baha’i realm, to whom the guardian, to a considerable extent, was indebted for his position. (9)

Later all the members of Abdul-Baha’s family, his daughters, his descendants, his sons-in-law, the brothers and sisters of Shoghi Effendi, and last of all his own parents were excommunicated. (10)

Riyadh Rabbani, a younger brother of the Guardian, has stated (11) that he for years had assisted Shoghi Effendi in his work. Then when Shoghi excommunicated his parents he called upon Riyadh to make a choice between him and his parents. Riyadh decided to side with his parents” whereupon he was rejected by his brother. It seems that Shoghi Effendi’s family accepted this severe discipline without resistance, for to whom could they appeal for redress?

Several quarrels, however, took place at the center of the Cause, one of which was over the custodianship of the shrine of Baha’u’llah in Akka. While ‘Abdu’l Baha lived, he in accordance with Muslim law as eldest son had the responsibility for his father’s grave. When he died the custodianship should have gone according to law to Baha’u’llah’s eldest surviving son Mirza Muhammad Ali. Not’ long after his accession to the Guardianship, Shoghi Effendi ordered the caretaker of the shrine to refuse entrance to certain people. Then the keys were taken from the caretaker by someone, and handed to the legal custodian Mirza Muhammad Ali, and neither the American Baha’is who intervened nor the British High Commissioner were able to dispossess Mirza Muhammad Ali of his rights. Shoghi Effendi could not go to court over this, for the Will of his grandfather which appointed him Guardian had not been probated, Finally, Shoghi Effendi approached the British District Commissioner, and he sent his Arab assistant who was on friendly terms with both parties to arrange a settlement out of court. This was done, the keys were turned over to Shoghi Effendi, and Muhammad Ali and his partisans were allowed free access to the tomb of Baha’u’llah, without let or hindrance. (12)

5-The Daughter of Mirza Badiullah denied entry into the Tomb

Many years later in 1952 the daughter of Mirza Badi’u’llah, Mrs. Qamar Bahai, went to Akka accompanied by a friend, and attempted to visit the tomb of her grandfather Baha’u’llah the caretaker employed by Shoghi Effendi was rude to them, and denied them entrance to the shrine. Whereupon Mrs. Bahai brought an action in the Israeli District Court in Haifa against Shoghi Effendi, to show cause why she was denied access to the tomb of her grandfather. She appeared in court in person accompanied by her counsel. Shoghi Effendi did not appear, but was represented by his counsel and two American Baha’is. The President of the Court, in an effort to settle the matter out of court, took Mrs. Bahai into his office and asked her if she would meet Shoghi Effendi for an amicable settlement, and she agreed. But to the great surprise of the President of the Court, the two American Baha’is rejected the proposal. Finally, the matter was referred to the Minister for Religious Affairs in the Israeli Government, who called in the parties separately, and worked out a settlement, whereby free access to the shrine, without let or hindrance, was granted to all members of the family of Baha’u’llah, and to this both parties subscribed. (13)

6-The house of Mirza Muhammad Ali usurped by Shoghi Effendi

During the lifetime of Baha’u’llah, ‘Abdu’l Baha and his family had resided in the town of Akka, while his brothers and their families had lived in the Bahji Palace several miles from Akka near their father. After the death of Baha’u’llah they continued to live there, owning undivided shares in the property, but without the income, which ‘Abdu’l Baha received, they were unable to keep this large property in good repair. When Shoghi Effendi became the head of the Baha’i Cause, he naturally felt it was important for him to control all the sacred sites. He, therefore, proposed to Mirza Muhammad Ali that he and the others move out of the Palace to nearby buildings that Shoghi might repair the Palace, and this was done. When they moved out they took with them the household equipment that they had been using, and Shoghi Effendi replaced this. (14) Thus the Palace also became a place of pilgrimage for Baha’is.

Simple events and incidents are distorted and misrepresented in the furtherance of private ends and personal ambitions. The cases treated in these pages [of God Passes By] are glaring examples of misrepresentations of historical facts.” It was said that. Shoghi Efendi when a student in Beirut was very fond of reading novels, and God Passes By should be considered an historical novel rather than authentic history.

In reading this book one is disappointed to find that the guardian of a Cause which has professed allegiance to peace and 1ove and world-brotherhood and absence of any sort of prejudice should have expressed such bitterness toward many of the members of his own family. He refers (15) to Baha’u’llah’s second son Mirza Muhammad Ali as “the Prime Mover of sedition,” he speaks of the third and fourth sons as “the vacillating Mirza Ziya’u’llah and the treacherous Mirza Badi’u’llah,” (16) and he calls the sons-in-law of Baha’u’llah “infamous” and “crafty.”

In his Messages also the Guardian sometimes condemned with great severity those who differed with him. The cable from Shoghi Efendi addressed to the Baha’is of the United States, which was printed in Baha’i News, No. 256, and dated April 15, 1952, a part of which will be quoted below, is a sample of his style. In this Message the Guardian announced the death in Haifa of Sayyid Ali Nayyir Afnan, a grandson of Baha’u’llah, and husband of Shoghi’s eldest sister Ruhangez. It is said that Sayyid Ali “had a charming personality,” and associated with, and befriended, men of all walks of life.” He expressed himself strongly as being opposed to the Guardian’s policy of rejecting anyone who did not fully agree with him, and as result he was himself excommunicated (Azal’s Notes, p. 1107) The 300-word cable begins thus: (17)

”Inform National Assemblies (that) God’s avenging wrath…. (has) now struck down….Sayyid Ali Nayer Afnan, pivot (of) Machinations, connecting link (between) old (and) new Covenant-breakers. “This alone (will) reveal extent (of) havoc wreaked (by) this virus (of) violation- injected, fostered over two decades (in) Abdul Baha’s family….(who) was repeatedly denounced by Center (of the) Covenant (as) his chief enemy………” 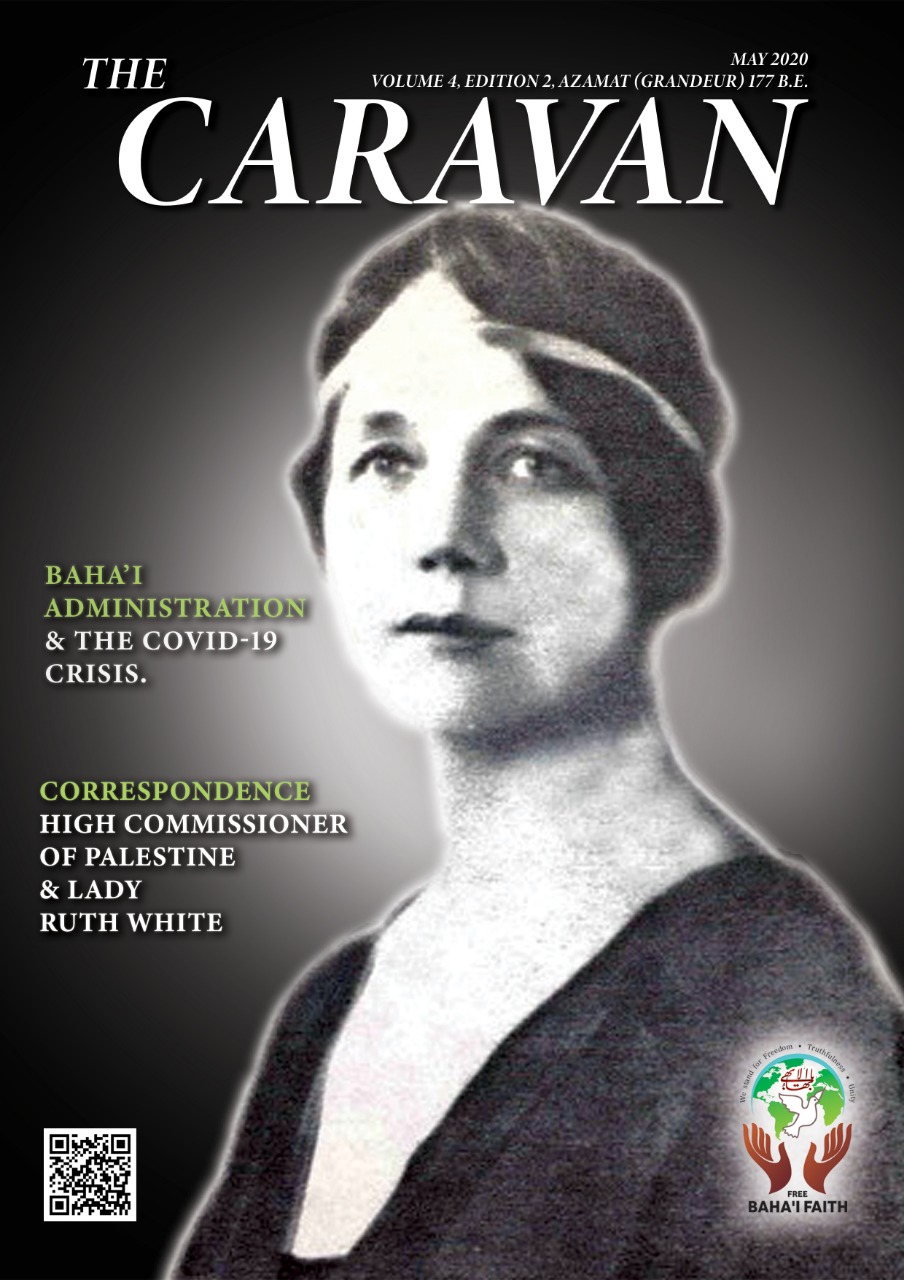