Mirza Ahmad Sohrab, a Persian-American author and a renowned Baha’i who served as a secretary and interpreter from 1912 to 1919 along with Lewis Chanler and his wife Julia formed the New History Society in 1929, in order to spread the teachings of the Baha’i faith. It was their independent effort to teach the principles of the Cause. 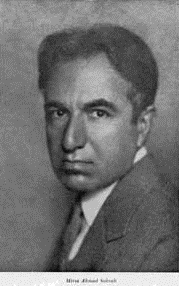 Mirza Ahmed used to take lectures in New York and many people used to attend it. Once at the end of a similar lecture demand came from a group of people who used to attend them regularly. These people wanted to be a part of the Cause and did not wish to be disbanded so Sohrab, Lewis and Julia all decided to form a little society. 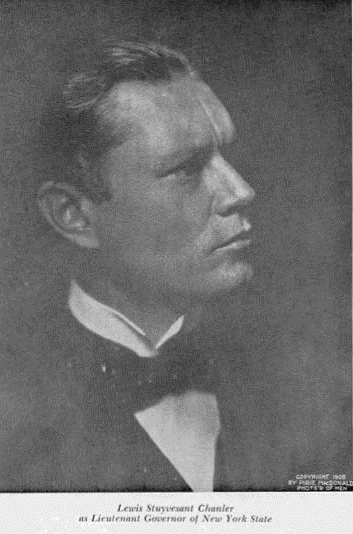 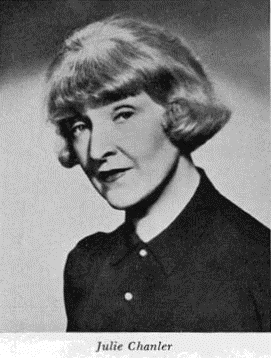 Initially, no name was decided for the group. Sohrab wanted to name it Soldiers of Light but no one liked this name and at the same time Julia suggested to call it the New History Society and Sohrab found it ideal and thus the said name got finalised.

Having settled with the name, the manuscript of The Ideals of the New History Society went to the printer. Mirza Ahmad ordered five hundred copies and it all exhausted in no time. It was a nice leaflet and the words of Abdu’l Baha which appeared on the front page read:

“The hosts of the Kingdom of Abhá are drawn and filed up in battle‐array on the plain of the Supreme Apex and are expecting that a band of volunteers’ step upon the field of action with the intention of service; so that they may assist that band and make it victorious and triumphant.”

A large group assembled in the sitting room on the eve of April 5, 1929. Ahmad Sohrab spoke to the followers of Christ and said that this day afforded such discipleship once again. After reading The Ideals of the New History Society, Ahmad Sohrab announced that those who wish to join the Society can sign their names in the book which is lay open between the lighted candles before the picture of Abdu’l Baha. The first person to go ahead and sign was Julia Chanler followed by Elsie, then Juliet Thompson, O. J. Hanko and others. Ahmad Sohrab’s name was written at the last. A total of 28 people joined the Society that day. Everyone present did not join saying they need time to think.

Later, a lot of Baha’is became a part of the group and used to attend meetings. Advertisements went up in the newspapers, notices were sent to popular Baha’is and thus a huge crowd used to gather for the meet & greet programs at the centre. Both Julia and Lewis poured in their money freely, joyously. Lewis always opened the meeting and used to charm everyone with his presence. Other Baha’i used to read from the works of Baha’u’llah and Abdu’l Baha. Baha’i books were sold at a table by the librarian of the Centre. The meetings held used to be lively and happening.

In January of 1930, Rabindranath Tagore from India addressed the New History Society in the ball room of the Ritz. The meeting was as usual opened by Lewis. It was a unique and memorable gathering of East and West, which was also reported by the New York Times the next day. Mr. Tagore appreciated the work of the New History Society with the following words while speaking to the audience –

“We are here tonight to offer our homage to Baha’u’llah, the last Prophet to come out of Asia. It makes me happy indeed to see that the New History Society is doing such splendid work for the propagation of the message of Baha’u’llah.”

Within a week of Mr. Tagore’s significant meeting, Albert Einstein addressed our group from the same platform. The New History Society was brought to the attention of the whole country.

Shortly after this, Professor John Dewey addressed the Society followed by Count Ilya Tolstoy, who gave a couple of lectures stretched over a few weeks. So, it went on and on with great speakers, great crowds, and the Society was on tip-toe all the time. Quite a few articles appeared in the newspapers.

The meetings continued weekly, at which those who wished signed their names before the picture of Abdu’l Baha leading to an increase in the members of the New History Society. Later, some of the most esteemed Baha’is collaborated with the Society, Mr. and Mrs. Kinney, May Maxwell to name a few. With their experience and knowledge more study groups were formed. Thus, the activities of the New History Society became more popular and successful amongst the Baha’is.

Looking at the gaining popularity of the Society, affairs in the Baha’i world neared the boiling point. The National Assembly thus wanted to settle the matter once and for all. Ahmad Sohrab was instructed to appear before the Local Board. Ahmad refused to appear. He knew he would be forced to accept uncompromising and unquestioning obedience and subservience to Shoghi Effendi, which he was not ready to comply.

Baha’i authorities wanted to destroy the new-born movement. Even if Ahmad Sohrab would have appeared in front of the Local Board, they would have ordered him to shut the Society. Just that they would not have expelled him from the faith.

Ahmad Sohrab was excommunicated by the National Assembly and Shoghi Effendi. Now the National Assembly was behind the members of the New History Society. They threatened and forced the members to leave the affiliation with the Society. The Baha’is who at one point had loved the idea of the New History Society were now afraid to even speak with its founders and got drifted away from the movement. A handful of supporters stood by the oath they had taken in front of the picture of the Master Abdu’l Baha and associated themselves openly with the Society. Some of the Baha’is remained in contact and used to meet the founders of the Society, although secretly, and at times send them a little bunch of flowers. The Baha’i organisation, with all its power over the Baha’is, could not break the bonds of affection and faith that existed in the heart of the believers.

Then came the Peace Movement. The founders progressed with a Peace shirt, calling themselves the Green International. They later started a newspaper with the same name. Green shirts were kept at the house, which were sold at cost and sent to many countries. The shirt was set up to rival the black shirt of Fascists and the brown shirt of the Nazis. During this period, The New Historian Publication came existence, which later became New History. The New Society knew what it wants and what are its goals. 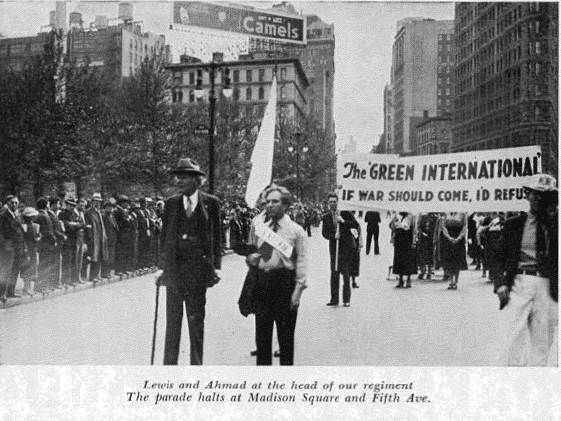 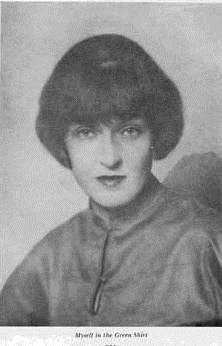 People became a part of the Society with eagerness, although some remained for a while others stayed for life. Mr. John Peterson, an old time Baha’i, was always at the Society meetings. He contributed a lot for the Cause. Mr. O. J. Hanko, also an early Baha’i, held to the Cause without reservations. Janet Osterman and her sister Claire always used to attend the meetings with radiant faces. Grace Kopman, an artist always stood by us through thick and thin. Anne Gemerd, a pretty Turkish girl never left us. Eugenie Slaydon loved the Cause with all the warmth of her nature, as did Mr. and Mrs. Charles Boyd to whom it was life itself. Sofia Froberg became part of the Society and of everything it did. Taylor Graves, an actor who was also a Charter Member of the New History Society, and his wife were unfailing friends of the Society. Outstanding among the members was Dr. Haridas T. Muzumber who accompanied Gandhi on the March to the Sea. The Society trusted in his mental integrity and knew him as an ally. With the Society was also Dr. Elfride Hesse who took the Cause with heart and hand by spreading its principles in many directions.

In the year 1935, on April 6, Saturday, being the 6th Anniversary of the Movement, a new Caravan Hall was opened. It looked beautiful, and for the members of the Society it was a great occasion.

Baha’i Literature in several languages were made to reach numberless institutions and homes, and the young people were catching at the thought of the Caravan as a link to unite them the world over. The Society started its own paper, The Children’s Caravan. Since the office work required a lot of energy, the New History Society took a back seat and the members were now known with their work for the Caravan. 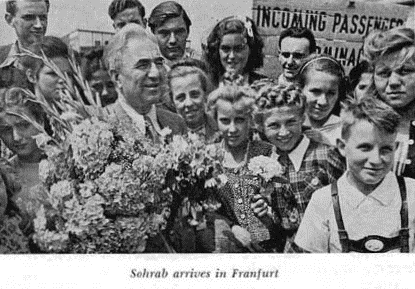 One morning the Caravan House was served a legal notice by the National Spiritual Assembly of the Baha’is of the United States and Canada, that the Caravan has no right to use the designation Baha’i Bookshop on the windowpane of the little store because the word Baha’i is registered in the US Patent Office, No. 245,271. The Caravan was therefore advised to discontinue use of the word Baha’i, not only on the show window but also on all the Caravan publications as well. Sixteen months later, on March 31, 1941, the Supreme Court of New York State declared that the plaintiffs have no right to a monopoly of the name of a religion and the defendants have an equal right to use the name of the religion in connection with their activities. 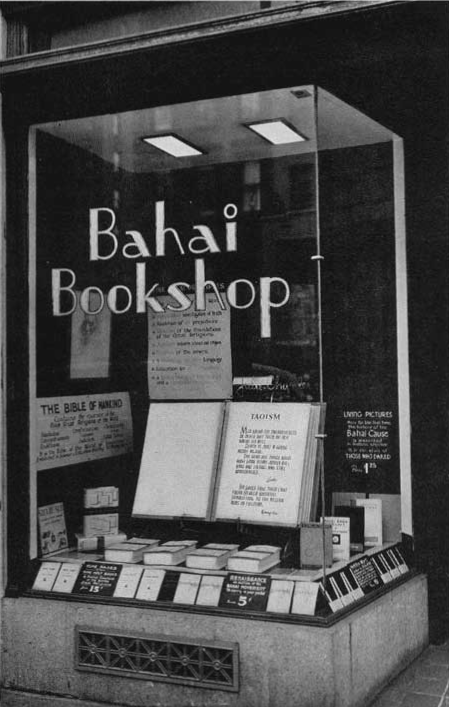 On March 2, 1942 one of the founders of the New History Society, Mr Lewis Stuyvesant Chandler left for the heavenly abode at the age of 72.

After the death of Mr. Lewis, the Caravan got into publishing some valuable books written by the founders and the members of the New History Society. The four most treasured addition being – Broken Silence, Abdu’l Baha’s Grandson, The Will and Testament of Abdu’l Baha – An Analysis, and The Story of the Divine Plan fall under the heading of controversial matters.

“At its height, just after World War II, the Caravan had grown to a membership of almost 250,000…. and its business soon overshadowed the New History Society.” Chapter 15 An article in the New York Times, states that in 1949 the German contingent alone had 100,000 members.

The Caravan of East and West was established with Board of Directors and Mr. Greenwald as the Chairman. 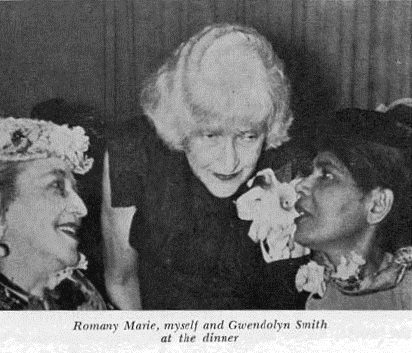 On April 21, 1953, the Caravan opened the very first Baha’i building in New York. 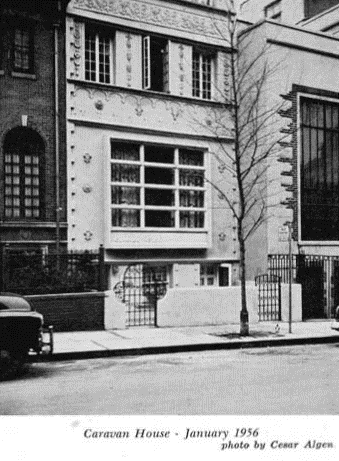 Distinguished guests from the United Nation’s Secretariat and Press, Caravan patrons and members, artists and musicians, and the library’s architect were there to pay tribute to the idealism of Baha’u’llah, in whose name this small centre of knowledge was being dedicated.

Sohrab died in 1958 and Julia Chanler a few years later. The Caravan of East and West existed as late as 1967 when Peter Bloch was director. 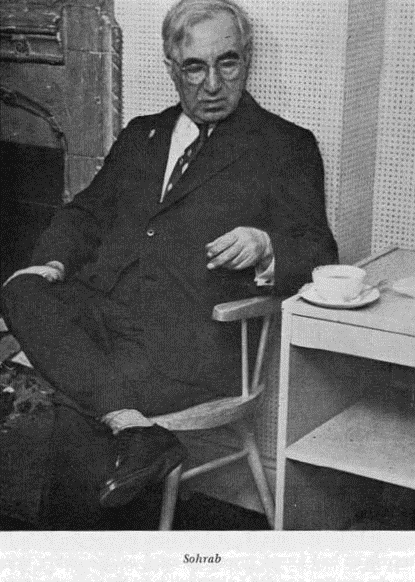 The Caravan House still exists at the same address as when founded.