Lady Ruth White is the most well-known Baha’i who is famous for challenging the authenticity of the Will and Testament of Abdu’l Baha.

As an author she always used to correspond with the name Ruth White. Sometimes she used to write ‘Mrs Lawrence White’. Her stage name was ‘Ruth Berkeley’. Abdu’l Baha used to call her as ‘Miss Ruth Berkeley’, as mentioned in the book ‘Baha’i Leads out of the Labyrinth’

She was born on 27th June in Brooklyn, New York. Her birth name was Emma Decker and her parents were Peter Decker and Anna Geiger. 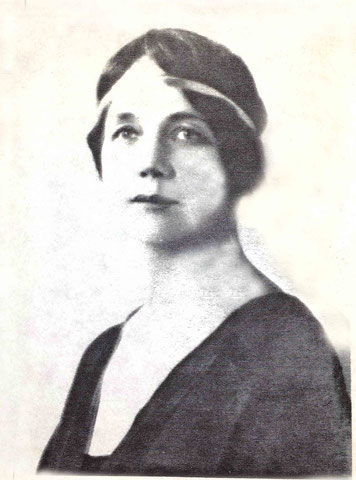 She was married twice during her life.

Her first husband was George Rowell. She had a daughter from this marriage.

Her second husband was Herbert Lawrence White. She met him at a Baha’i gathering in New York.

She was evidently yet living as late as 1962, in South Carolina, per the Pierre Pont genealogy.

Lady Ruth white turned against Shoghi Effendi due to his cruel acts. She has narrated the following incident:

“In the autumn of 1919, I sent to Abdu’l Baha [i.e. Sir Abbas Effendi] an American Express Company check of five hundred dollars and asked him to apply it to some of the many charities he was dispensing.

About four months after, we arrived in Haifa as the guests of Abdu’l Baha. On the day before departure I asked Abdu’l Baha if he had received the check. Without a moment’s hesitation and very emphatically he said that he had not received it. He repeated this a number of times, and seemed indignant that it had not been turned over to him. I discussed this with various members of the family of Abdu’l Baha, and one of the brothers-in-law said he would go to town and enquire about the matter.

He returned and said there were no record of the check. When I returned to America I asked the American Express Company to look up the receipt of the check I had sent through their office, and on the back of it was the signature of the person who had received the cash. This person was Shoghi Rabbani [i.e. Shoghi Effendi].”

Ruth White challenged the alleged Will of Abdu’l Baha

“If Abdu’l Baha had had any secret intention of appointing Shoghi Effendi as Guardian of the Baha’i Cause, it does not seem plausible that he would have excluded him from the entourage that accompanied him on his trip through Europe and America during 1912. Shoghi Effendi at that time was eighteen years of age and spoke and wrote English, Persian and Arabic; yet he was not included in this trip. Even after Abdu’l Baha returned to Palestine, instead of choosing Shoghi Effendi as his secretary, he chose Ahmad Sohrab, who had accompanied him to Europe and America, and who continued as his secretary for five succeeding years.

It is important for those who are interested in the Baha’i Religion to free them from the idea that the family of Abdu’l Baha is a “Holy Family.” In fact his family, and “in-laws,” with the exception of his wife and sister, were somewhat materialistic, and viewed the religion more or less as a little family affair with a strong bent toward organization. For years they have indoctrinated, more or less, the pilgrims who visited the home of Abdu’l Baha, me included, with this conception of religion. This partly nullified the great universal teachings. The result was that when Abdu’l Baha passed from this world in November, 1921. Some of his family, who had laid the ground-work for organization through these pilgrims while he was alive, hastened to establish it more firmly when he died. All this resulted in making the Baha’i Movement, under the dictatorship of Shoghi Effendi, an organization which for narrowness and bigotry has no parallel in history except in the dark ages.”

Abdu’l Baha has said, “There are no officers in faith. I do not and have not ‘Appointed’ anyone to perform any special service, but I encourage everyone to engage in the service of the Kingdom. The foundation of this Cause is pure spiritual democracy and not a Theocracy.”

Following the teachings of Abdu’l Baha, Lady Ruth White founded the Free Baha’i faith, an ideological group trying to disseminate the true faith of Baha’u’llah as against the Baha’i Administration and the UHJ.

Is the Baha’i Organization the Enemy of the Baha’i Religion? An appendix to Abdu’l Baha and the promised age. New York City 1929 OCLC 40732459

Abdu’l Baha’s alleged will is fraudulent; an appendix to The Baha’i religion and its enemy, the Baha’i organization,, 1930. Rutland, VT. The Tuttle Company OCLC 40853993

Correspondence between the High Commissioner of Palestine and Ruth White, Concerning the Alleged Will and Testament of Sir Abdu’l Baha Abbas. 11. Los Angeles, Calif. : White, 1932. OCLC 23790959