Read on to find out how Shoghi Effendi converted charity funds to his personal use.

As narrated by our first inspiration, Lady Ruth White in her book, The Baha’i Religion and its Enemy The Baha’i Organization – “In the Autumn of 1919 I sent to Abdul Baha an American Express Company check of Five hundred dollars and asked him to apply it to some of the many charities he was dispensing.

About four month after we arrived in Haifa as the guests of Abdu’l Baha. On the day before departure I asked Abdu’l Baha if he had received the check. Without a moment’s hesitation and very emphatically he said that he had not received it. He repeated this a number of times, and seemed indignant that it had not been turned over to him.

I discussed this with various members of the family of Abdu’l Baha, and one of the brothers-in-law said he would go to town and enquire about the matter. He returned and said there were no record of the check. When I returned to America I asked the American Express Company to look up the receipt of the check I had sent through their office, and on the back of it was the signature of the person who had received the cash. This person was Shoghi Rabbani [i.e. Shoghi Effendi]. 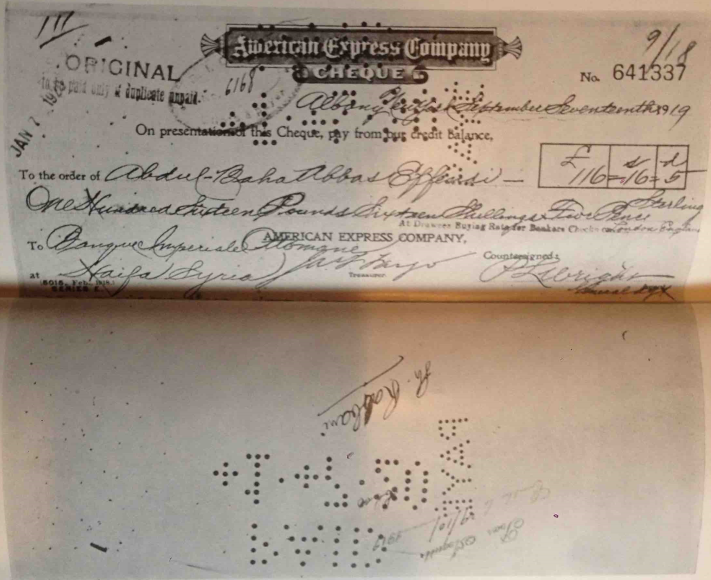 I asked the American Express Company to Photostat this check for me, which they did. Herewith it is a reproduction of the check with the signature of Sh. Rabbani on the back. Here then is proof positive that Shoghi Effendi cashed out the check and also proof that the son-in-law [presumably Mirza Muhsin Afnan] who purported to enquire of the check did not do it at all. Otherwise, he would have ascertained in a few minutes from the office of the American Express Company at Haifa that the check had been cashed by Sh. Rabbani, as I had given the son-in-law the whole information, the date of sending, the name of sender, etc. All of which shows that there was collusion between the son-in-law and Shoghi Effendi. Circumstantial evidence also points to the fact that Shoghi Effendi used the money to go to Oxford University.

For immediately after cashing the check he departed for Oxford, this despite the fact that Abdu’l Baha did not wish him to go. Some may naturally ask: How could Shoghi Effendi have cashed the check unless he had authority to do so. This he may have had. Yet, the fact remain that the proceeds were never turned over to Abdu’l Baha. My readers may, therefore, draw their own conclusions.”